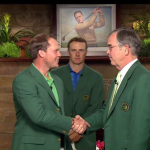 28 Year old Yorkshireman Danny Willett won his first major and stunned the golfing world by coming from three shots back to win the U S Masters at Augusta on Sunday. A solid final day performance – 5 under par 67 – saw Danny win by three shots on 5 under but had to wait over an hour to realise his dream while Jordan Spieth was still out there. Spieth who led for 63 holes and who eventually finished tied second with Lee Westwood seemed to have it all wrapped up going through the turn 4 under on the day and 7 under overall, but bogeys at 10 and 11 and a quadruple bogey at the short 12th saw him fall to 1 under and his chances of back to back Green Jackets gone. Danny’s last 18 months have been brilliant with him winning the Nedbank Golf Challenge at Sun City, the Omega European Masters, the Omega Dubai Desert Classic and finishing second in the Race to Dubai behind Rory McIlroy. 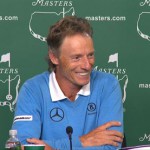 Two time winner – 1985 and 1993 – Berhard Langer at 58 years of age was also in the mix at the start of Sunday but slipped back to finish in a tie for 24th on 6 over and there was more excitement especially at the short 16th where Davis Love 111, Shane Lowry and Louis Oosthuizen all made holes in one. 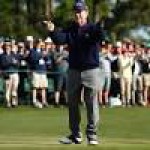 Augusta said farewell to one of my heroes, 8 time Major champion, Tom Watson. Two time Masters winner, 66 Year old Watson missed the cut on 8 over par but the Augusta faithful showed the great man how loved and revered he is with huge cheers on every hole as he played in the Masters for the last time on Friday. Tom also won the Open Championship 5 times including back to back wins in 1982 and 1983 and the U S Open in 1982. During Friday’s round Tom paid homage to his former caddie Bruce Edwards who passed away in 2004 when he left an egg salad sandwich at the 13th tee and coincidently the 12 anniversary of Edwards passing. Tom said “That’s part of the tradition, my Masters tradition”.