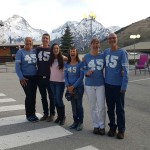 On 16 April six fun loving, happy go lucky friends, Denise, Brad and Jo, Ann – Marie and Robin and Ant, and which included some family boarded Etihad Airways for a skiing holiday in Les Deux Alpes, France. For three of us, Jo, Ann – Marie and Ant it was virgin territory with Ann – Marie never having set foot on snow before. We all converged on O R Tambo International Airport in  Jozie before boarding our flight to Geneva via Abu Dhabi. Twenty four hours later we arrived at our destination and checked into our hotel Les Deux Alpes Club Med. 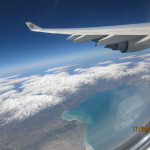 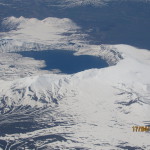 The flight from Jozie to Abu Dhabi was pretty quiet and event free but the day flight from Abu Dhabi was very interesting for me, I sat next to a Swiss farmer on his way home to Bern from Nepal. This fine gentleman travels several times a year to the Philippines, Central Africa and Asia to assist the local people with sustainability projects. It was also his idea to take a few photos from the aircraft 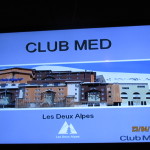 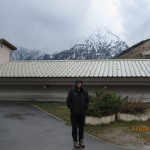 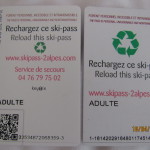 After a 2 1/2 hour drive from Geneva via Grenoble and seeing the turn to Alp D’ Huez of Tour De France fame – even more respect for those Tour riders now – we arrived at Les Deux Alpes. As we arrived the resort was hit by a mild snow storm and yours truly, clearly from warmer climes and clad only in shorts and a tee shirt had to forsake his luggage in the car park and make a wild dash for the warm surrounds of the hotel reception area. After we checked in, got our ski passes and put our luggage in our rooms we headed for the ski equipment room to get our ski boots, skis, ski poles and ski groups. Denise and Robin who had skied before were put in the intermediate group while Ann – Marie and I were put in the beginner or debutant group. Brad and Jo were snow boarding so Brad, who has done the black slopes, was in the advanced group while Jo was put in the beginners group. 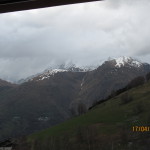 After a hearty buffet dinner we repaired to our rooms to enjoy the view and for those of us hadn’t skied or snow boarded before a chance to think about this new adventure. We all put our kit out for the morning in an order that we wouldn’t forget anything. Good snow fall overnight ensured we’d have some fun on the slopes although that was never in doubt. 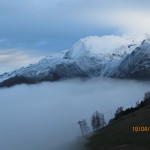 Monday morning dawned crisp with a fresh dusting of snow and much apprehension among the three debutants. The six of us all kitted out in our new ski clobber enjoyed a wonderful breakfast and then headed to the kit room to put on our boots, get our skis and join our groups. Between the kit room and our respective meeting places the hotel staff were there to help us on our way with a shot of Genepi. This rather pleasant but fiery liquid is made from a local flower found on the slopes around Les Deux Alpes 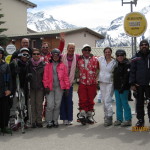 At 09:30 Ann – Marie, Jo and I made our way rather slowly in our ski boots to the yellow lollipop which told everyone we were beginners to meet our instructors Jean – Marie and Pierre, and the rest of our group while Denise, Brad and Robin confidently headed toward their groups. Jean – Marie and Pierre escorted us to the ski lifts and a few minutes later we were all standing in the snow with our skis on listening to our instructors. Our first runs were about 25 metres and almost flat and it here that I was christened Robocop by Pierre. “No, no Robocop, you must relax, you’re too stiff Robocop.” Suddenly Denise joined us, “Hey what are you doing here Big Sis”, I asked. “They told me I was backward and have to join your group,” was my sister in law’s reply. Backward in this sense meant that although Denise can ski, the instructor thought it better that she spend some time “Refreshing with the debutants.” After 45 minutes we were “walked” off toward a slightly longer and steeper slope where we were shown how to stop properly. “Snow plough, snow plough” was a regular call from Jean – Marie and Pierre as one of us got out of control and couldn’t stop. This slope had a pulley system so when we got to the bottom  we’d shuffle toward the pulley, grab onto it and get pulled back to the top of the slope to start the run again.

The afternoon session was a bit more exciting, we were taken to an even longer and steeper slope where we were taught to to turn. After a few relatively straight runs Jean – Marie put cones in the snow and we had to ski around them. That was fun and we’d hardly settled in there when we were whisked off to the “Magic Carpet”. The “Magic Carpet” was at the bottom of an even steeper slope. Jean – Marie and Pierre put out cones which we had to ski around at greater speed and here some of us like yours truly had a few tumbles. Then it was in the queue for the five minute ride on the “Magic Carpet” back to the top of the slope to do it all again.

Meanwhile Robin and Brad were skiing and snowboarding up a storm on the red and black slopes and over dinner regaled us with stories of flying down slopes, sharp turns spraying snow and being real skiers.

Then came the acid test, we were on our way to being real skiers. Jean – Marie and Pierre took us down the slope to a “new” ski lift which took us a lot higher to a “proper ” ski run. Ann – Marie and I failed dismally, while the rest of our group skied off down the run and disappeared with Pierre, Jean – Marie guided Anne – Marie and I along at snails pace occasionally having to pick one of us up after a fall, some of which were rather spectacular. Robin and I did the same run a few days later with Denise and Ann – Marie and although we were a bit faster there were still had some anxious moments

The days really whizzed by, a couple of walks into the village of Les Deux Alpes on afternoons “off” to have a look at the shops and get a few curios, and an afternoon spent riding the ski lifts, and funicular railway to enjoy the views from the top and suddenly it was time to go home.

One of the big things for us were the awesome people we met in our ski and snowboarding groups, our instructors and the fun time we spent with them on the slopes and having a drink or meal with them. Guys, thank you for helping make our holiday that much more special