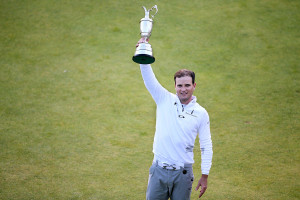 What an enthralling days golf, it couldn’t have been scripted any better with American Zach Johnson winning a four hole play off with South African Louis Oosthuizen and Australia’s Marc Leishman. Zach Johnson is a great champion and worthy of the accolade “The champion golfer of the year and winner of the gold medal” and his win propels him 13 places up the World Rankings to 12 while fellow play off competitors Marc Leishman and Louis Oosthuizen jump 34 places to 27th and 3 places to 13th.

The amateurs faired well with Ireland’s Paul Dunne sharing the overnight lead on Sunday with Louis Oosthuizen at 12 under par, however a 6 over par 78 saw him fall back to finish in a tie for 30th while American Jason Niebrugge shot 2 under to finish tied for 6th at 11 under and win the Silver Medal. Two other amateurs, England’s Ashley Chesters and American Oliver Schneiderjans finished in a tie for 12th at 11 under par. Five amateurs made the cut which came at level par.

Spare a thought for Jordan Spieth who won the first two majors of the year and finished a shot back on 14 under par after a bogey 5 at the tough 17th. Spieth would have been only the second golfer after Ben Hogan, who achieved this feat in 1953, to win the years first three majors of the year and there is no doubt the world number 2 has set his sights on the PGA at Whistling Straits from 13 to 16 August