Like with the first class, we continued with the bump and run and here we really spiced it up. Each youngster was given three balls to chip to the target, take their best chip and putt it into the hole. Where it really got interesting was when after a few rounds we asked them to play the same shots from the rough and when we were done with that they then had to chip the ball with elevation to the target. The idea behind chipping out of the rough is to show the youngsters how little control you have playing out of the longer grass. It is also key that they understand the importance of getting the ball in the hole hole in as few shots as possible from around the green, ideally two shots, a chip and a putt. Neil and I have explained the importance of the short game and quoted examples of players stats that pop up on TV during a tournament, for example, standing on the 13th tee a player is three under par for the day, but he’s missed four fairways and only hit seven greens in regulation. How is it that he’s three under par. Sure, he might have birdied three of the par fives by getting on in two, birdied a par four and a par three, and he also might have dropped two shots by missing a fairway and having to play out sideways or not getting up and down from around the green. The other three greens he’s got up and down, whether it’s from thirty or forty yards out or a bump and run from around the green

In the photo below Neil is explaining to the youngsters why you should hold your club lightly and just above the grass when you are playing out of the rough. Quite often you see players grip the club tightly and push it into grass and this can cause the club to snag in the longer grass on the backswing 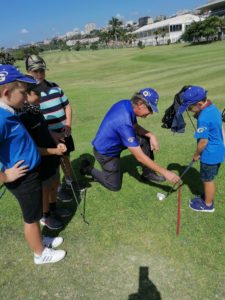 Jared playing a bump and run from the longer grass, notice how still he keeps his head

Elijah playing the bump and run

Andrew putting with Neil, Elijah and Mikey looking on

Mikey putting for the win

Yours truly giving a demo of the lofted chip shot. Great camera work by Neil