Hideki Matsuyama became the first Japanese male to win a Golf Major when he donned the Green Jacket at Augusta National on Sunday, 11 April 2021. In winning the Masters he became one of only seven golfers to have won the Low Amateur and the Green Jacket, the others being Jack Nicklaus, Ben Crenshaw, Cary Middlecoff, Phil Mickelson, Tiger Woods and Sergio Garcia.

Two Japanese ladies have won Majors, they are Chako Higuchi who won the 1977 LPGA Championship and Hinako Shibuno who won the 2019 Women’s British Open, and only a week before Hideki’s triumph, 17-year-old Tsubasa Kajitani won the second Augusta National Women’s Amateur. While Hideki wasn’t around to see Tsubasa’s win he was well aware of it and all he wanted to do was follow in her footsteps, give Japan two winners in two weeks and make Japan proud. That he did 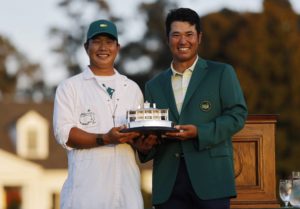