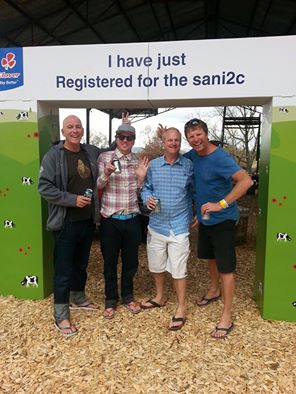 And so day one of Sani2C draws to a sun baked close, the teams all showered, fed and boozed. Philthy cunningly paid two local ladies to carry his team’s boxes t…o the tent in the sort of executive decision making process that’s made Angry Swamp Birds the team they are. Massages have been booked for my stalwart riding partner John Ross who definitely dug deep, and put up his hand to be counted. He did collapse in a heap though so he probably wasn’t the last man standing. What a day of riding, without a doubt the most amazing route. The Angry Swamp Birds soared like eagles, Roundhouse Snap, Milton John Osborn, got dumped but are paddling out again with hopes and dreams, the Lactic Acids, Lee Macpherson and Robin Gowlding pedalled like women possessed and the Crossmans stuttered in perhaps saving themselves for tomorrow as Jen had to carry her ailing husband over the line. There’s no doubt it hurt and it’s very possible the Swamp Birds have shot their bolt. Or have they? Johnny had a little halfway rub down reminiscent of Hilton 1986. The nostalgia may see him home. There’s now a stiff wind blowing through the camp, there’s a stiff drink in my hand (and let’s hope that’s the last stiff thing in our tent). Milky is now playing fingers to see who buys the next round (there may well be more of that in the Roundhouse Snap tent later). Well that’s it for a while.